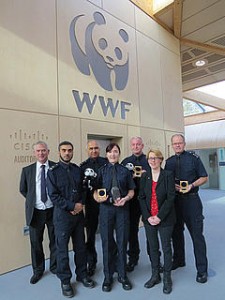 order Force and the National Crime Agency (NCA) have won the WWF sponsored Wildlife Crime Operation of the Year Award for their joint efforts to tackle organised wildlife crime in the UK. A representative from the organisations received the award presented by Chief Constable Simon Prince at the ceremony which is held as part of the National Wildlife Enforcers Conference on Saturday 22nd November. Grant Miller from the Border Force and Paul Bolton from the National Crime Agency collected the award from WWF’s Living Planet Centre in Woking on Monday 24th November.

The award was given for an operation in February 2014 when twelve critically endangered iguanas were seized from smugglers by Border Force officers at London’s Heathrow Airport. The 12 San Salvador Rock Iguanas were each wrapped in an individual sock and had been stuffed into suitcases. Following an investigation by the NCA the two smugglers, both Romanian women in their 20s, were each sentenced to 12 months in prison.  Cases such as this show how working together the Border Force and NCA can have a critical part to play in stopping the illegal wildlife trade here in the UK.