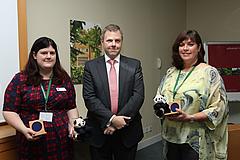 Border Force and the NWCU have won the WWF sponsored 2015 Wildlife Crime Operation of the Year Award for their outstanding contribution towards Operation Cobra 3 which specifically targetted the illegal wildlife trade.

Samantha Trackman (Border Force) and Helen Bulmer (NWCU) are pictured here being presented with their award by Chief Constable Simon Prince during the 27th Annual National Wildlife Enforcers Conference on Saturday 28th November. The innovative inter-agency collaboration undertaken by Bulmer and Trackman contributed significantly to the success of Operation Cobra 3. Bulmer and Trackman now continue to share their knowledge to develop future operations, ensuring their work has an ongoing legacy.

Sarah Goddard, Species Policy Officer at WWF-UK, said:
“I commend Helen and Sam on their excellent work, which exemplifies successful partnership working between two very important enforcement bodies in tackling the illegal wildlife trade. As this Operation shows, it is crucial that efforts to stop the illegal trade in wildlife in the UK are maintained. The UK Government should continue to resource both Border Force and the NWCU – the alternative would be to face devastating blows for the fight against the illegal wildlife trade”.

Martin Sims, Head of National Wildlife Crime Unit commented:
“I am delighted that the work Helen and Sam put into the success of operation Cobra 3 has been formally recognised. Their contribution was hugely significant and I believe leaves a legacy for the future. This operation has also identified how significant the United Kingdom is in the illegal wildlife trade. Now this has been exposed, it is for us within the UK Border Force and UK Policing to continue the battle in combating this type of crime.”